The Clinton Community Garden has a long history of beekeeping. It predates the Giuliani-era ban on the bee keeping practice in New York City. Back then, for many years, the person responsible for taking care of bees was Sid Glaser. Sid put the garden and the bees in the spotlight when he appeared on a segment of Animal Planet, demonstrating a “bee beard.” Sid retired years ago, turning over care of the colony to several generations of apprentices, who began to apply a more natural approach to beekeeping as a means of fortifying the bees against Colony Collapse Disorder.

Bee keeping involves a lot of work, research and luck — there are so many variables to consider when taking care of bees. And there is never a guarantee that it will be a success even with the best effort and care. In recent years we have lost several colonies and each time there was a different reason/cause. For example, last fall we lost our bees to mice invasion. 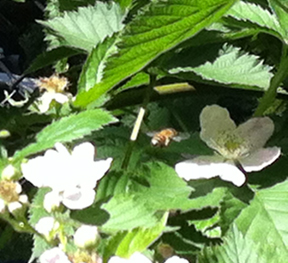 We are hoping to raise a strong colony and if everything goes well we might even be able to harvest some honey in the fall. Our Hell’s Kitchen Honey is legendary: it’s unheated, unfiltered, unprocessed, unmessed with and it can’t get any more “local” than that. All proceeds from honey sale go directly back into the garden to fund both gardening and beekeeping supplies.

Visitors interested in our bees can spot them flying back and forth between such bee favorites as lavender, butterfly bush, thyme, borage, bee balm, clematis, echinacea, and black-eyed Susan, the bird baths, and their home in the Native American bed on the garden’s west side. Their elegant “bee house” is made of cypress, which is naturally rot resistant and is constructed to maximize air flow, important both in preventing the buildup of moisture and Varroa mites, implicated in Colony Collapse Disorder. The bees are a delight to watch, but please observe them from a respectful distance and try to avoid standing in their flight path.